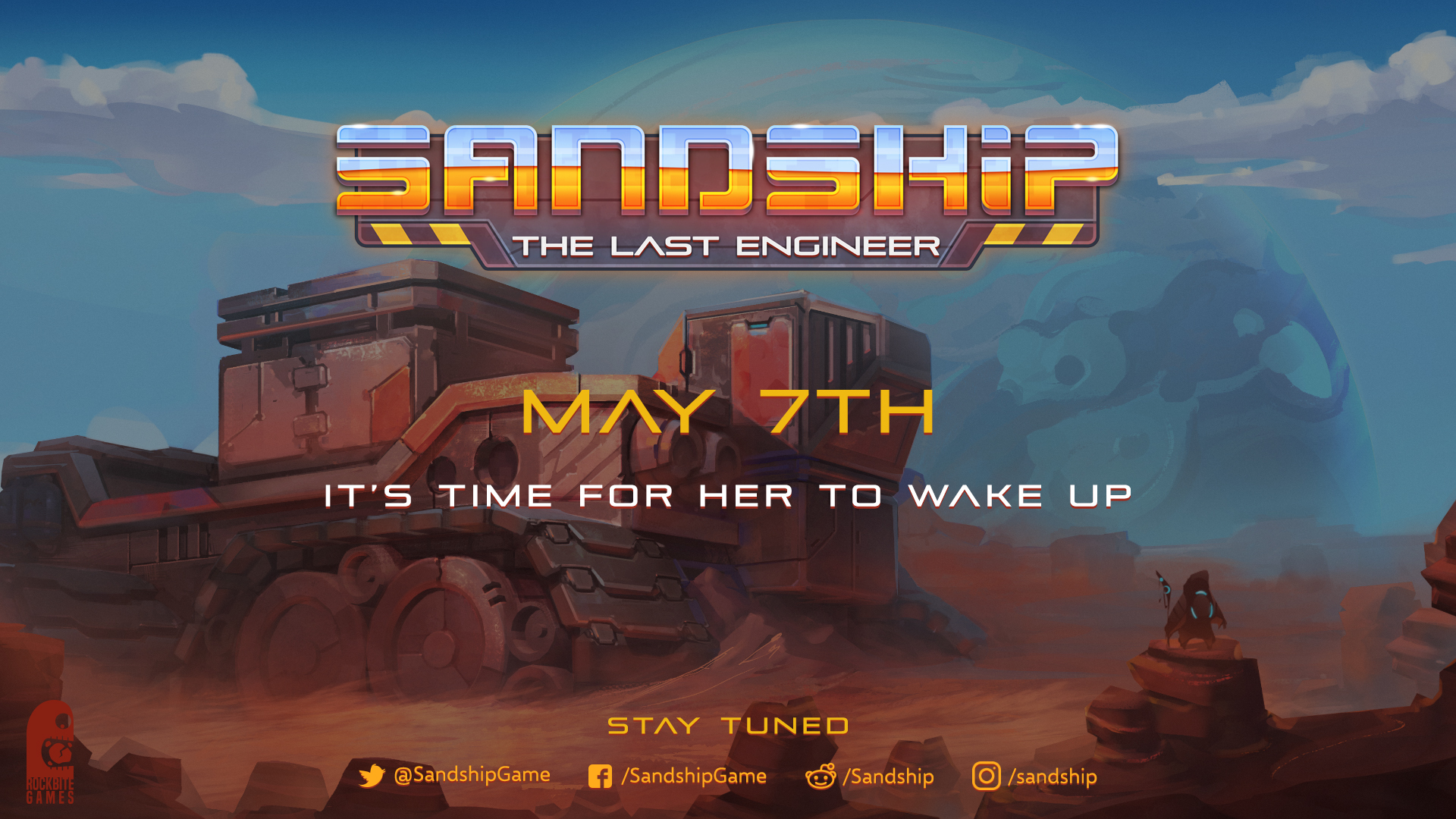 Hello, I’m azakhary, and this is my blog 🙂

Yesterday, we sent a newsletter update with the official “release date” (May 7th) and a message – “It’s time for her to wake up”. If you’ve followed us for some time you probably know that “her” is Aya, the Sandship… which made it very tempting for me to start this post with “Hello, I’m Aya, and this is my blog.”

I thought I’d make this post personal – about the journey of the developers that helped us get this far.

We’ve been working on this for 2 years (or more… I really lost count by now), and this is for sure the biggest game I’ve ever worked on. The scope is just gigantic – and it’s very easy to get lost and just miss “what matters”. You add feature after feature, fix thousands of bugs, make amazing art… but then you need to take a second, pause and remember, what matters is – “people having fun.”

About two months ago, we were at Pax East showcasing Sandship to attendees. It was an amazing experience to actually see someone play your game, and just PRAYING it will not crash or that they will like it. While at the same time, we were watching attentively and seeing if they really were enjoying the game or if they were thinking “this is weird?..”. And during these milliseconds of time, we were trying not to act weird or overbearing. It’s so scary!

So many things happened after… Some of us got sick with “totally-not-coronavirus”, and we had to code half-dead. Then the actual pandemic happened and the team never actually got to really re-unite. Well, at least I didn’t. I got back to HQ, but there was no HQ as quarantine was in full force. And so we had to finish the game, the most stressful part of the development, like this. From our homes.

Uh, so where was I? right – “doing what matters”. We had some beta players and a soft launch in New Zealand, which means we finally got some data on how people play the game, and we got feedback too. And there was some concerning feedback about paywalls and game just “stopping people from having fun”, “waiting for days to pass a quest”. So I thought, that can’t be right… that’s not the game we are making. So I played the game again, and uh it looked fine to me… but then it hit me. All of us were concerned about new features and fixing bugs, so we were always in a hurry to get to a certain point in-game, never playing it “normally” and just abusing that “finish now” button. This is not how people will actually play the game, will they? When we usually play the game for testing it takes us 3 minutes to leave the first location. And some players reporting it taking them days.

So I thought, ok, the floor is lava! Let’s play the game, from beginning, and just imagine it REALLY hurts to push that finish now button. (Actually would be good to just have an electric shock every time you push it, but hey, no need, I have a good imagination). I started playing without spending a single gem, and it got weird really fast. Like real weird. Here are some of the things that were totally not ok:

After the tutorial, I needed a data card, I didn’t get it, so I had to try 3 times. and each time took me 3 minutes or longer. It took 10 minutes of doing nothing to get it, and I think 90% of players would just leave there. After getting that card player can start the research which was another 10 minutes.. of doing nothing. And it took me half an hour to just finish the first location. And this is with me knowing the game inside-out. But then other crazy stuff started happening like you not having space in your factory to make things, and you can’t increase it because of the 2 hours wait time, and then you can’t purchase a new factory because your Sandship is too small, and you can’t grow it because you had to make a lot of resources, that you can’t make because you don’t have space to make them! No one in their sane mind will enjoy this. Some of our soft-launch players probably thought, “Are the developers of this game stupid or just borderline sadistic?”

After some investigation we figured – while gameplay issues seemed huge, in actuality, it’s just a few numbers that needed tweaking to fix (like 30 of them). But it was really weird that we didn’t feel that early on… Because we got caught up with things that don’t actually matter. It’s an important lesson for everyone I guess. To take a deep breath – and look around because sometimes what seems to be the obvious stuff can become invisible.

Discovering something like that just weeks before the release date isn’t very nice, but it is what it is, and a quick patch is coming soon. There are some other issues too, which are a bit harder to fix, and we’ll address that with another patch after the release.

May the 7th is just around the corner, and we are just finishing the last bits. The team is getting very, very tired, and working from home isn’t helping… it’s like you don’t get to stand up and go “home”, you know? I am really proud and thankful to all of them for holding up so far and doing their utter best to deliver on the expectations of our players. We were imagining a big release day – hosting a huge event with a party, all of us being in the office together as we launched the game, but all of it isn’t looking really plausible in this new world…
Yet… is it really what matters? Maybe what really matters is that on May 7th we hope to make a lot of people happy, and we get to see and be a part of it.

It’s a lazy Sunday today, the last week of development is ahead of us.
We want to say a big thank you to our players for all the warm wishes and being with us on this tough journey. We hope you guys are in good health, and we’ll do our best to make the game you asked for.